I spent the first 9 weeks of my life well protected with my litter siblings, – I have four sisters – my mother and my half brother Anderl von der Rote Traun, at Stiedl’s family.

I am a purebred wirehaired dachshund with the form value “excellent”.

I received this award at the age of 12 months at the breeding show of the Dachshund Club (BDK) of the Munich Section on 01.06.2014.

In summer 2014 I successfully completed the Companion Dog training.

In 2015 I continued with the water test including gun-shyness (Wasser- and Schußfestigkeitstest), the blood-tracking test (Schweißprüfung), the test for voice on track (Spurlautprüfung) and the fox’s earth test (Eignungstest für Baujagd). I passed all these tests with full points.

In 2016 I mastered the versatility test (VP) and the difficult trail test (SchwhK/40).

In March 2017 I was therefore awarded third best working dog in the BDK.

In 2017 I passed the qualifying examination for the rummaging hunt on wild boar.

Let’s see what my mistress has in mind for me. 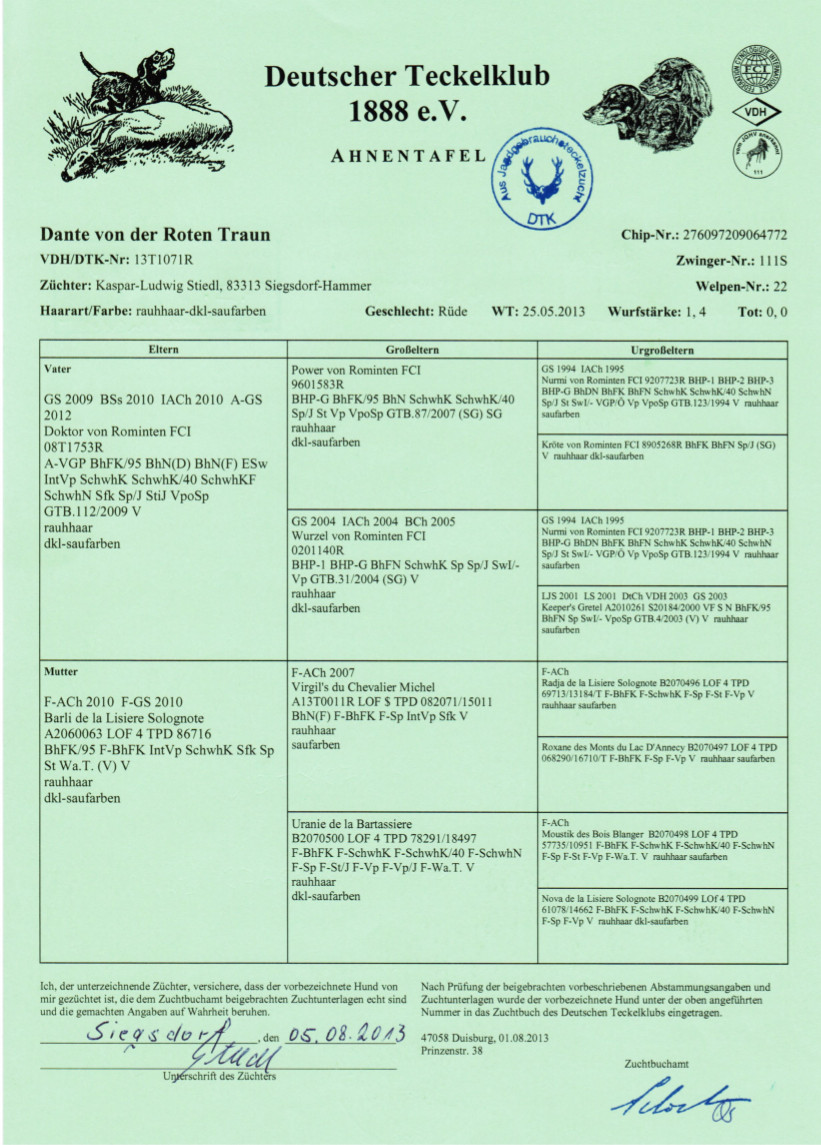 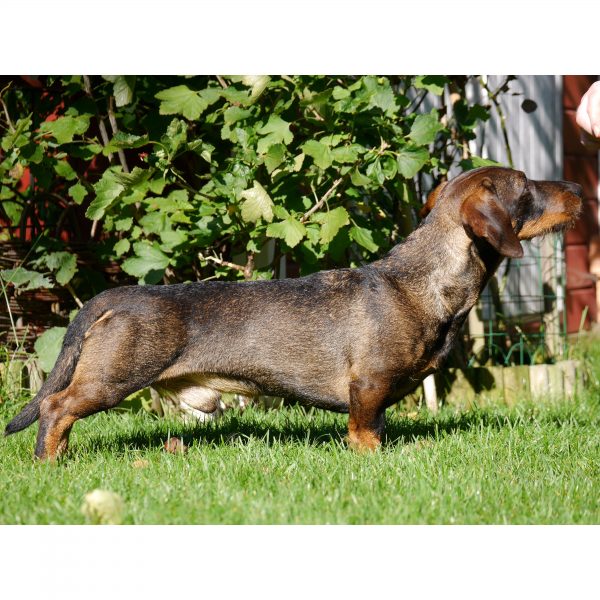 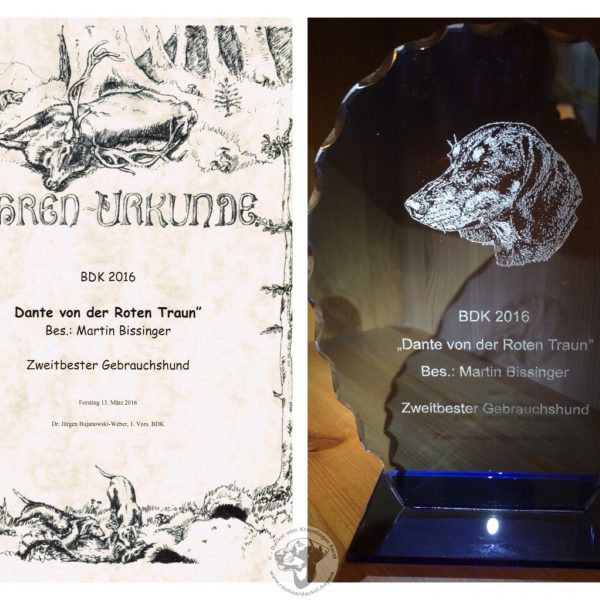 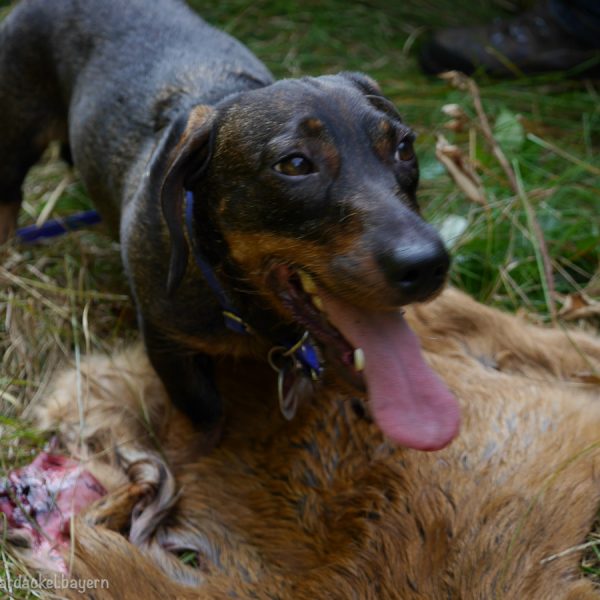 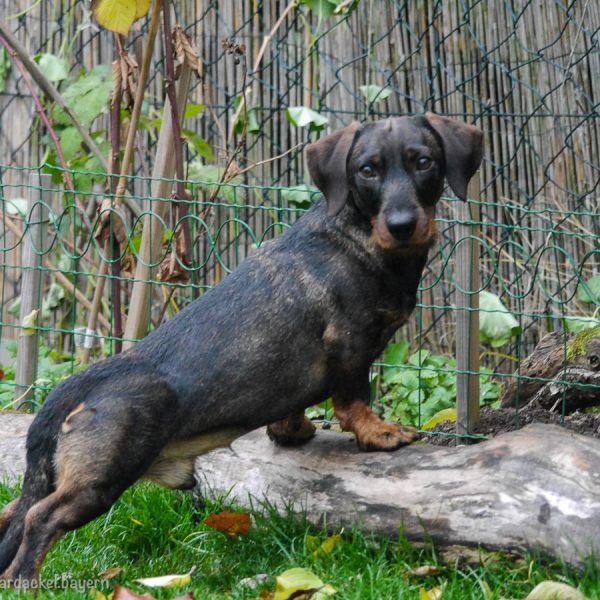 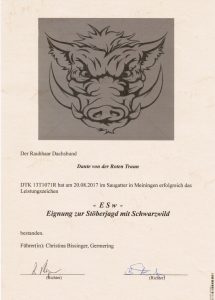 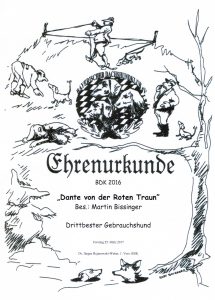 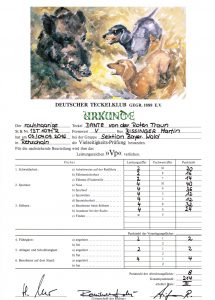 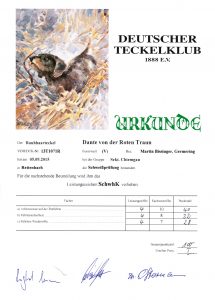 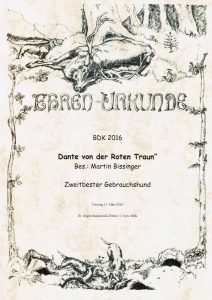 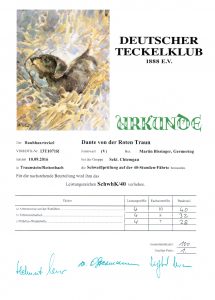 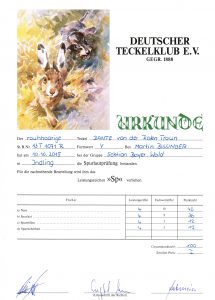 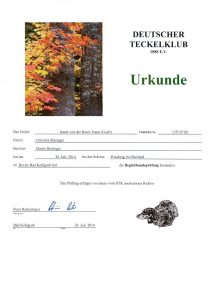 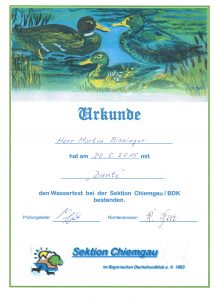 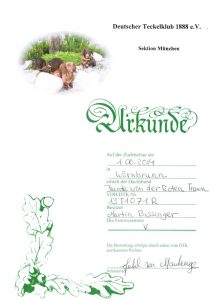 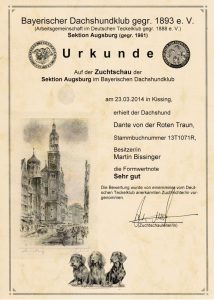 On Valentine’s Day Gustl (Dante von der Rote Traun) had for the first time the opportunity to participate in a fox’s earth hunt.

It started with eight shooters and two more earth dogs.

Unfortunately, the weather was not bad enough to meet the fox right in the foxhole. Only in the 5th foxhole Gustl gave sound and barked. It was to be heard clearly that he encountered a fox.

Now we had to wait. At the foxholes before Gustl get out again after 25 minutes at the most. After 2 hours of waiting the situation became a little queasy. No fox, no dog. What may have happened?

We waited until nightfall.

Since Gustl wore a earth transmitter, we could determine relatively exactly that he was stuck in an area of about 1m x 2m.

In the darkness we could do nothing more.

For a long time all participants, especially the dog handlers, discussed how we should proceed now. Maybe one or the other would have acted differently, but in this situation we decided like this.

The entrance was closed with a rock. (security measure in case Gustl leaves the den after all and runs on one of the surrounding country roads).

After a sleepless night the shock was great. The fox has dug his way out nearby the rock. Had Gustl come outside now?

No. The examination of the earth transmitter showed that he was still at the same place.

Now an excavator was quickly organized. Meter by meter it went into the depth. After 3 meters the excavator arm was no longer sufficient. The earth transmitter indicated a further 1.60 metres to go down. So a bigger excavator was needed. Dig, dig, dig.

Finally the earth transmitter shows only 20-30 cm to Gustl. Now carefully continue with the spade. When finally there was a small hole in the tube, a small black nose looks at us! Yippi, he’s alive!

The hole gets bigger, the head looks out. The joy is enormous to be able to close our Gustl in the arms again!

After 25 hours in the foxhole, Gustl was almost unharmed and freed from a depth of 4.5 meters.

After he has emptied a water bottle, he absolutely wants to go back to the foxhole… *head shake* – was probably not quite finished with his work yet!

Thanks to all who helped so naturally and uncomplicatedly, but want to be unnamed here! 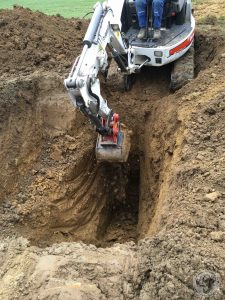 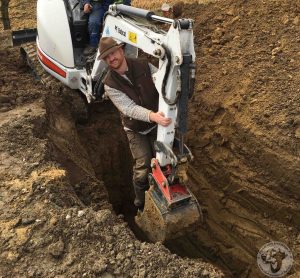 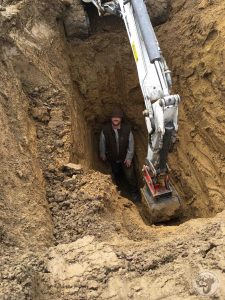 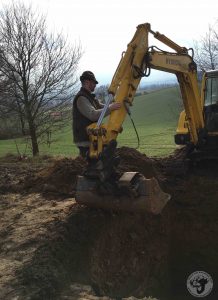 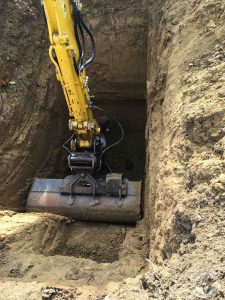 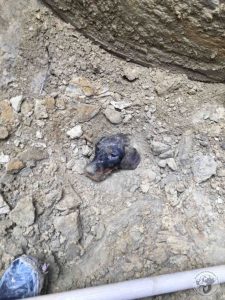